While most of the countries in the world see their exchange rates fluctuate and be determined by the supply and demand of their local currency (when the currency is not paired to a major one such as the USD or the EUR) , the DRC Central Bank has its own a unique way to determine its daily official exchange rate.

It is estimated that 80% of Forex transactions are done in the Congolese black market, affectionately nicknamed ‘Wall Street’! Therefore, every morning, a typical trader will call the most important dealers in Wall Street to assess the real supply and demand and set the exchange rate of the day (yes the rate is set up once a day!!!) for his bank.

At the end of each day, the Central Bank (CB) is calling each bank to request for the volume of transactions done during the day and the related exchange rates. It is worth nothing that the CB has absolutely no mean to control the figures given by the traders!!! Then, the CB is computing the weighted average rate and issue the official exchange rate of the day (at the end of the day!!!).

As a result, the Congolese official exchange rate is derived from the street…

In the past the Central Bank has accused ‘Wall Street’ dealers to be at the origin of the CDF volatility. The dealers’ answer was scathing: they (the CB) should stop printing money and they will see the difference instead of blaming us…
By Herve Otschudi - July 22, 2011 3 comments:

Email ThisBlogThis!Share to TwitterShare to FacebookShare to Pinterest
Labels: Forex

Electricity situation of the DRC...

The hydroelectric potential of the DRC represents 37% of the African continent potential. It is estimated at 100 000 MW with 44 000 MW around the Inga site in the Bas-Congo province.  However, the electricity production actual figures are far from reaching this potential. Indeed, the current installed capacity is a 2 580 MW with a meager 1 294 MW actually available for the population and the industry. The difference between these two figures is the result of years of underinvestment, poor maintenance, and involvement of the State in the management of the national electricity company (SNEL)…

In 2008, only 8.9% of the population had access to electricity and it is worth noting that I am not talking about a 24/7 supply as power shortage is part of Congolese daily routine even in the most posh neighborhoods of the capital, Kinshasa. 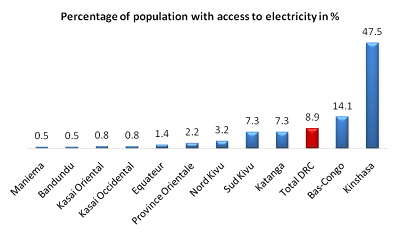 Following the CDF shortage described in my previous article, the USD has continued to lose value (-0.7%) against the local currency. According to Ali Nasser, trader in an international bank operating in Kinshasa, the commercial banks had to purchase CDF from the Central Bank in order to find the necessary Congolese francs to pay their customers taxes.

As stated in my last article, the Congolese economy is highly dollarized and the principal reason companies keep/seek CDF is to pay taxes which cannot be paid in foreign currency. Commercial banks unable to sell USD to the Central Bank to pay for these taxes because of their exchange position (square or too short) had to borrow money (from the same Central Bank between 32.5 and 48%). 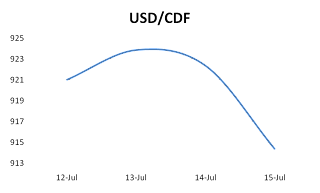 On the inflation side, the Consumer Price Index has increased by 0.27% in a week leading to a year-on-year inflation of 18.68%. If this trend remains stable until the end of the year, the annual inflation rate should reach 26.43%.

The Congolese money market is actually facing a Local Currency (LCY)-CDF shortage and many commercial banks have to recourse to the Central Bank for overnight borrowing. While the average overnight borrowing rate stands around 15% p.a., the Central Bank borrowing rate varies from 29.5% for the banks that can offer securities as guarantee to 48% p.a. for those with no securities!!! This increases significantly the cost of funding for commercial banks that are historically USD liquid.

Strangely enough, the Congolese MPs have apparently being paid in USD recently (to be verified). The payment of civil servant constitutes an important source of local currency for the market. By paying them in USD, this aggravates the LCY shortage. The resulting higher demand for Congolese francs by commercial banks has pushed the USD down by 0.2% overnight against the CDF.

In an economy largely dollarized, one may wonder what the role of the local currency is if even public servants are paid in foreign currency...
By Herve Otschudi - July 12, 2011 3 comments:

50 years after the independence (further Analysis ) …

In order to have a better understanding of the DRC situation 50 years after its independence, it  worth comparing it with the situation of some of its ‘neighbors’. I have included in the analysis an emerging country, South-Africa; to show how long will be the road to ‘prosperity’ for the DRC. As stated in my previous article, the DRC has one of the lower GDP per capita in the world.

I acknowledge the fact that the GDP per capita is far from being a perfect indicator as it assumes that the revenue produced in a country is equally divided among all its inhabitants. We know that this is a flawed assumption in the World in general and in developing countries in particular. This inequality in revenue repartition is measured by the GINI coefficient (we’ll talk about it in a future article).

However, the GDP per capita is one of the only indicators that allow us to compare countries with different population size and based on the latter, the DRC is in a very bad situation even when compared to other ‘poor’ countries such Rwanda and Zambia… 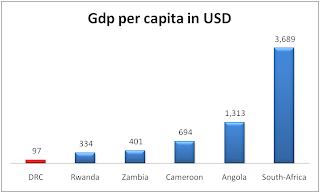 Most of the countries used for comparison have had a quasi-flat growth of their GDP per capita, except for Angola that have seen a substantial growth since the end of the war and thanks to the revenues generated by the oil industry (the graph was distorted by South Africa presence, therefore, I have decided to leave it out). 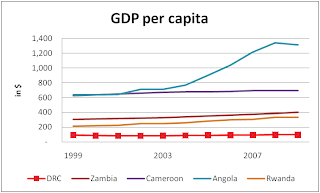 When we look at the GDP in absolute term, the Congolese figure is really weak for a country with such a potential. Years of war, mismanagement from the authorities, low level of investments, the difficulty to do business in the DRC, the high level of corruption are some of the reasons to explain these poor performances… 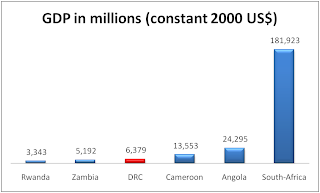 (GDP per capita is gross domestic product divided by midyear population. GDP is the sum of gross value added by all resident producers in the economy plus any product taxes and minus any subsidies not included in the value of the products. It is calculated without making deductions for depreciation of fabricated assets or for depletion and degradation of natural resources. Data are in current U.S. dollars (World Bank).)

50 years after the independence…


During the last 50 years the Congolese GDP (adjusted for inflation) has grown at a meager CAGR of 0.5% per year reaching its highest level in 1988 with a GDP of USD 8.3bln before a free fall to USD 4.2bln in 2001. However, since 2001, we have registered an increase in the country general production as shown in the graph below but only stands at 76% of its 1988 level. 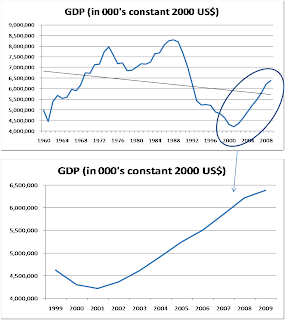 It is worth noting that despites this relative improvement, the GDP per capita (adjusted for inflation) remains one of the lowest in the world at USD 97 per inhabitant!!! More than 3 times lower than the figure of 1960!!! This can be explained by the fact that the population has grown at a far higher rate than the GDP. 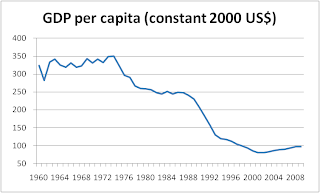 According to the Central Bank data, the DRC has registered a fiscal surplus of approximately USD 3 million in March after a deficit of USD 2 million in February. Both government revenues and expenditures have substantially increased in March. On the revenues’ side, this increase can be explained by the payment of the 3rd installments of corporate taxes which is due on the 31st of March each year. On the expenditures’ side, the increase is mainly due to an increase in civil servant salaries payment (+45%) and in State entities ‘functioning fees’ (+76%). Year to date, the government has earned USD 3 million more than it spends. 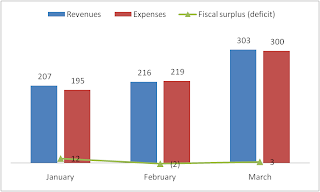 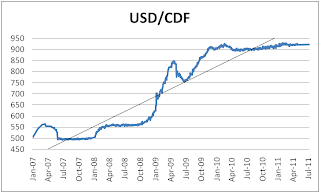 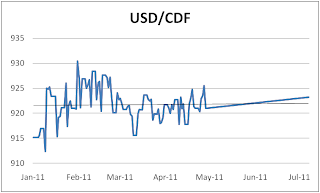 According to a poll organized by the Central Bank of Congo among business leaders, the business confidence in the economy (Measured by the difference between the proportion of those with a positive opinion and those with a negative one) has grown from to +23,6%  in May from+ 4.6% in April. This is a substantial increase month-on-month and seems to demonstrate a higher confidence in the authorities’ abilities to maintain a certain macroeconomic stability.
By Herve Otschudi - July 09, 2011 1 comment: